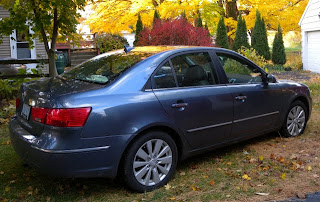 My 2009 Hyundai Sonata that I bought at Performance Hyundai in St. Catharines, Ontario is a POS. The car is only 20 months old, and in that short time...

- had the disk rotors machined because of vibration (which didn't solve the problem),
- when it's cold out, the radio occasionally refuses the let AM or FM work (they couldn't find anything wrong),
- had a headlight assembly replaced because it had condensation in it,
- had an oil leak on the engine repaired,
- had a temperature sensor replaced after the heater failed,
- has a loud buzzing in the exhaust in certain conditions (cold, low revs, pulling strongly, like up a hill) that they say is "normal",
- and now, at only 20 months of age, has a seized brake that has completely worn out a disk pad and caused major damage to the rotor.

My car is now limp in the driveway until the brake parts come in next week so it can be repaired. Thank goodness I have a carpool partner that can pick me up, otherwise I'd have to rent a car to get to work. (BTW when I called to ask if it was covered under warranty they immediately said "no", not even knowing if it's seized because of a rusted caliper or a seized piston in the caliper. In my opinion, it should be covered under warranty if it's a piston problem, but I'm too warn out by their battles to argue and will just pay to get it fixed somewhere else.)

This short posting doesn't tell the whole story of how frustrating the car has been. It has been overnight at the shop a number of times, even having to be there three days once because they thought they could solve the vibration problem with a software fix (they couldn't). For the vibration problem, they finally sold me a set of new tires at half price and are hoping that solves it. (We'll see in the spring when I put them on. With the larger diameter winter tires I have on now the vibration is reduced, but not gone.) (UPDATE: The tires didn't fix the problem, but I'm too frustrated to pursue this further with Hyundai.)

At one point a month or so ago Hyundai offered me a "real good deal" on a new car because they agreed that my car has been a lemon (Hyundai does not have a formal lemon policy, unlike some other manufacturers). In exchange for this deal, I had offered to take down a recent blog and video I posted about the car, and even promised to post the name of the salesman who had "come through for me" in the end. When I look back the numbers, it actually wasn't a very good deal, but I was just looking forward to getting rid of this lemon and moving on to something new. In the end, they reneged and wanted $2000 more when I went in to sign the papers because the car had been in a minor accident (which they knew about, but had overlooked when they assessed the trade-in value of the car).

I'm not sure what I'm going to do with this car. Like many cars, the depreciation out-races the payments so if I sold it I'd be stuck with the outstanding balance on the loan. It's not actually a bad car to drive, but I've lost confidence in it, and in Hyundai.

Anonymous said…
Sounds like a real ordeal, Peter. I'm glad that my post this morning was so timely and let you share the word! I just don't get the reference to "Point of Sale".
9:45 AM

Peter Beens said…
Hehe, I'm sure you're joking, but just in case you're not...!