Showing posts from April, 2012
Show all

April 23, 2012
From  http://windows.microsoft.com/en-us/skydrive/loyalty : "You’ve been with us a long time, and through a lot of changes. We appreciate you sticking with us, and we want to make it easy for you to keep using your 25 GB of free online storage. All you need to do is go to the SkyDrive storage page and choose Upgrade my storage. That’s it—you’re locked in for 25 GB for free." If you have a SkyDrive account, lock in now while you still can!
Post a Comment
Read more 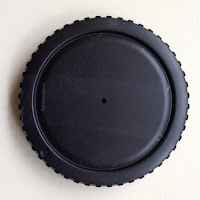 In anticipation of the  Worldwide Pinhole Photography Day  happening on April 29, I bought a few camera body caps  that could be modified to use on our class's Canon Rebel digital camera so we could take some pinhole pictures . One of my grade 12 Communication Technology students was tasked with researching the process, but we were impatient and just went down the machine shop and had them use a lathe and the smallest drill bit they had to modify the body cap: It was time for some test pictures!  We had no idea how to long to make the exposure, but we knew it needed to be relatively long. How about 1 second? Amazing, that first guess was pretty accurate... But what about the blurriness? We know that pinhole images aren't that clear anyway, but this was worse than expected. Could the hole be too large? Maybe. So we grabbed the first solution we could find -- masking tape -- and covered the hole with it and made a pin-sized hole. The result: The image
Post a Comment
Read more

Sample Technology Comments My thanks to the London Region MISA PNC team for developing these resources under a Creative Commons license. To download the original source of this material, visit  http://goo.gl/gGrJU .
Post a Comment
Read more
More posts